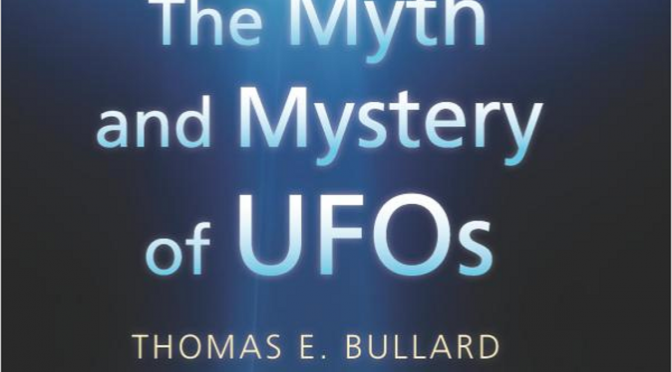 When United Airlines workers reported a UFO at O’Hare Airport in November 2006, it was met with the typical denials and hush-up that usually accompany such sightings. But when a related story broke the record for hits at the Chicago Tribune’s website, it was clear that such unexplained objects continued to occupy the minds of fascinated readers. Why, wonders Thomas Bullard, don’t such persistent sightings command more urgent attention from scientists, scholars, and mainstream journalists?

The Myth and Mystery of UFOs

The answer, in part, lies in Bullard’s wide-ranging magisterial survey of the mysterious, frustrating, and ever-evolving phenomenon that refuses to go away and our collective efforts to understand it. In his trailblazing book, Bullard views those efforts through the lens of mythmaking, discovering what UFO accounts tell us about ourselves, our beliefs, and the possibility of visitors from beyond.

Bullard shows how ongoing grassroots interest in UFOs stems both from actual personal experiences and from a cultural mythology that defines such encounters as somehow “alien”–and how it views relentless official denial as a part of conspiracy to hide the truth. He also describes how UFOs have catalyzed the evolution of a new but highly fractured belief system that borrows heavily from the human past and mythic themes and which UFO witnesses and researchers use to make sense of such phenomena and our place in the cosmos.

Bullard’s book takes in the whole spectrum of speculations on alien visitations and abductions, magically advanced technologies, governmental conspiracies, varieties of religious salvation, apocalyptic fears, and other paranormal experiences. Along the way, Bullard investigates how UFOs have inspired books, movies, and television series; blurred the boundaries between science, science fiction, and religion; and crowded the Internet with websites and discussion groups. From the patches of this crazy quilt, he posits evidence that a genuine phenomenon seems to exist outside the myth.

Enormously erudite and endlessly engaging, Bullard’s study is a sky watcher’s guide to the studies, stories, and debates that this elusive subject has inspired. It shows that, despite all the competing interests and errors clouding the subject, there is substance beneath the clutter, a genuinely mysterious phenomenon that deserves attention as more than a myth.