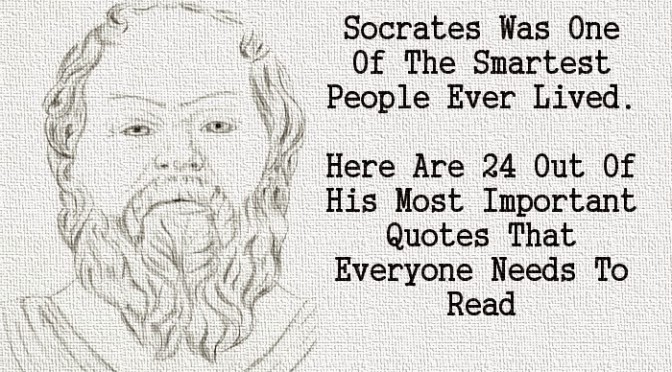 Socrates was a classical Greek philosopher credited as one of the founders of Western philosophy. He is an enigmatic figure known chiefly through the accounts of classical writers, especially the writings of his students Plato and Xenophon and the plays of his contemporary Aristophanes. Plato’s dialogues are among the most comprehensive accounts of Socrates to survive from antiquity.

1) “The only true wisdom is in knowing you know nothing.”

2) “The unexamined life is not worth living.”

3) “There is only one good, knowledge, and one evil, ignorance.”

4) “I cannot teach anybody anything. I can only make them think”

5) “Be kind, for everyone you meet is fighting a hard battle.”

10) “Sometimes you put walls up not to keep people out, but to see who cares enough to break them down.”

11) “Wonder is the beginning of wisdom.”

13) “Education is the kindling of a flame, not the filling of a vessel.”

15) “Let him who would move the world first move himself.”

16) “The secret of happiness, you see, is not found in seeking more, but in developing the capacity to enjoy less.”

17) “The secret of change is to focus all of your energy, not on fighting the old, but on building the new.”

19) “Prefer knowledge to wealth, for the one is transitory, the other perpetual.”

20) “understanding a question is half an answer”

21) “True wisdom comes to each of us when we realize how little we understand about life, ourselves, and the world around us”

24) “The mind is everything; what you think you become”

Socrates (/ˈsɒkrətiːz/; Greek: Σωκράτης [sɔːkrátɛːs], Sōkrátēs; 470/469 – 399 BC) was a classical Greek (Athenian) philosopher credited as one of the founders of Western philosophy. He is an enigmatic figure known chiefly through the accounts of classical writers, especially the writings of his students Plato and Xenophon and the plays of his contemporary Aristophanes. Plato’s dialogues are among the most comprehensive accounts of Socrates to survive from antiquity, though it is unclear the degree to which Socrates himself is “hidden behind his ‘best disciple’, Plato”.

Through his portrayal in Plato’s dialogues, Socrates has become renowned for his contribution to the field of ethics, and it is this Platonic Socrates who lends his name to the concepts of Socratic irony and the Socratic method, or elenchus. The latter remains a commonly used tool in a wide range of discussions, and is a type of pedagogy in which a series of questions is asked not only to draw individual answers, but also to encourage fundamental insight into the issue at hand. Plato’s Socrates also made important and lasting contributions to the field of epistemology, and his ideologies and approach have proven a strong foundation for much Western philosophy that has followed.