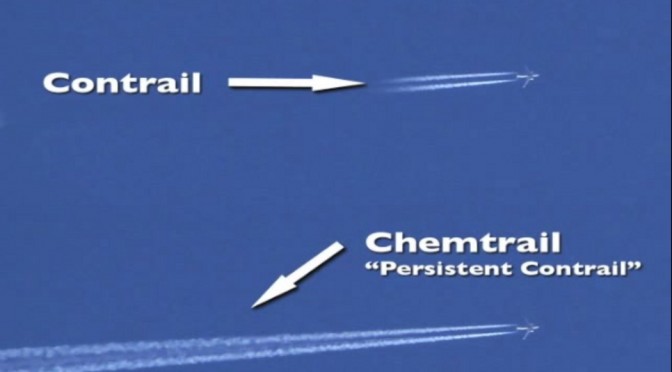 In this video we view documentations and Patents for Chemtrail/Cloud Seeding/Geoengineering/Stratospheric Aerosol Injection and the chemicals being used.

5. American Society of Civil Engineers, 1995: Guidelines for Cloud Seeding to Augment Precipitation. ASCE Manuals and Reports on Engineering Practice No. 81..

8. Weather Modification Advisory Board, 1978: The Management of Weather Resources. Report to the Secretary of Commerce, 2 volumes.

About Chemtrails from wikipedia

The chemtrail conspiracy theory is the false claim that long-lasting condensation trails, called “chemtrails” by proponents, consist of chemical or biological agents left in the sky by high-flying aircraft and deliberately sprayed for purposes undisclosed to the general public. Believers in the theory argue that normal contrails dissipate relatively quickly and contrails that do not dissipate must contain additional substances. Those who subscribe to the theory speculate that the purpose of the chemical release may be solar radiation management, weather modification, psychological manipulation, human population control, or biological or chemical warfare and that the trails are causing respiratory illnesses and other health problems.

The arguments have been dismissed by the scientific community; these are normal water-based contrails that are routinely left by high-flying aircraft under certain atmospheric conditions. Although proponents have tried to prove that the chemical spraying does take place, their analyses have been flawed or based on misconceptions. Because of the persistence of the conspiracy theory and questions about government involvement, scientists and government agencies around the world have repeatedly explained that the supposed chemtrails are in fact normal contrails.

The term chemtrail is a portmanteau of the words chemical and trail, as contrail is of condensation and trail.