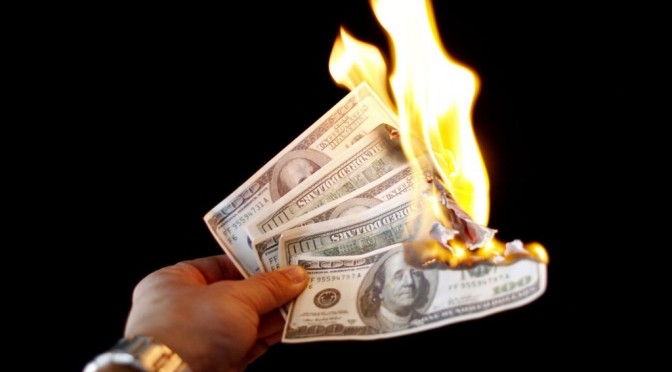 Do you still think the US dollar is worth anything? You might, but other countries appreciate the Chinese Yuan as it has replaced the US Dollar in trading currency while, it seems, most American citizens remain unaware.

Of course, it seems the general population of the United States will be the last to notice, as many American citizens are more concerned about the latest sporting event or what any given celebrity is doing than to actually pay attention to what’s happening around them.

So, while we were sleeping…

According to Jeff Berwick from The Dollar Vigilante:

Last week, I received news from a contact who is friends with one of the biggest billionaire shipping families in the world. He told me they had no ships at sea right now, because operating them meant running at a loss.

This has never happened before. It is a horrific economic sign; proof that commerce is literally stopped.

According to Ben Fulford, the reason why there are no ships delivering goods is because shipping companies are demanding to be paid by the Chinese Yuan versus payment by the US Dollar.

In the United States, we are seeing evidence of this as Wal-Mart is in the process of closing 269 stores. If Wal-Mart can’t survive in this horrendous economy, then that should be the first sign of the inevitable death of the US Dollar.

In order to cover up this fiasco, the US Government voted against auditing the Federal Reserve, who is the same entity that has put the US Dollar in this precarious position of impending (and current) failure.

It may take several months before people start noticing the dollar death as hyperinflation skyrockets the cost of goods that used to be imported from other countries. The United States will see more conglomerate corporations collapse as smaller “Mom & Pop” stores resurface to supply the needs that Wal-Mart can no longer support.

I’ve been writing for several years about Pluto in Capricorn and how it will destroy money, religion, and government. You can find many articles, such as Expect HUGE Changes During This Rare Astrological Alignment!,  HUGE Changes Are Upon Us With Pluto In Capricorn, It’s All Collapsing, Right On Schedule!, and UPDATE! Stocks PLUNGING Again – Pluto In Capricorn.  For those who follow the cycles of astrology, the writing has been on the wall since the 1700’s, which was the last time that Pluto was in Capricorn.

The death of the dollar is nothing to fear. It actually presents new opportunities for growth as the old paradigms collapse.

In the following video, I present a number of solutions to current issues that are draining the collective consciousness:

How it all began…

While America Was Sleeping, The US Dollar Officially Died

The beginning of the end began with the concept of fiat currency.

For example, let’s imagine I am the Federal Reserve and I just printed the first $100. I lend it to you and expect you to pay me $110. Where will you get the extra $10 when it never existed to begin with, nor has it been printed yet? This is fiat currency and is ALWAYS destined to fail.

Now, The US dollar is failing while the US sleeps. Your favorite sports teams, American Idol, the Kardashians, Justin Beiber, CNN, and every other distraction thanks you on behalf of the Federal Reserve.

You may now fall asleep watching your regularly scheduled program.

A new day is about to begin…