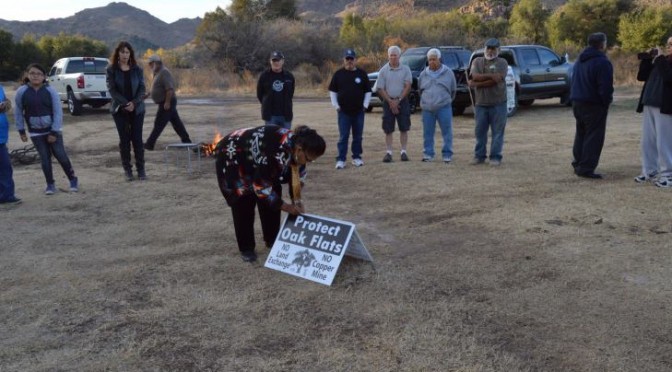 Of course they stuck this into the NDAA because they know the NDAA always passes, regardless of the horrible things that may be hidden in there. No elected official wants to be seen as “unpatriotic” for voting no on the “defense” bill.

On December 4th, the House passed the National Defense Authorization Act (NDAA) which included a provision to transfer 2,400 acres of Apache ancestral and ceremonial lands to a foreign mining company.

“Since time immemorial people have gone there. That’s part of our ancestral homeland. We’ve had dancers in that area forever – sunrise dancers – and coming-of-age ceremonies for our young girls that become women. They’ll seal that off. They’ll seal us off from the acorn grounds, and the medicinal plants in the area, and our prayer areas.”

Prior to the House vote, the House and Senate Armed Services Committee attached a provision to the NDAA that would transfer Apache ancestral lands located in the Tonto National Forest to Resolution Copper, a subsidiary of Rio Tinto an Australian-English mining company. Sen. John McCain (R- AZ) was instrumental in pushing to get the provision language included.

All 2,400 acres are part of Apache ancestral and ceremonial lands. So although Republican lawmakers have tried for years to secure the transfer of these lands, they have always run into strong opposition from the San Carlos Apache Tribe and Democratic lawmakers and conservation advocates.

“The blatant greed being presented by these members of congress is astounding. The company has spent a fortune buying candidates for office in the same way one would collect baseball cards. And now for their thousands per candidate, they expect to destroy the cultural heritage of a native tribe for billions. How much is our collective cultural heritage worth? To these candidates, not much at all it seems. Legalized bribery has made them no longer stewards of our nation, but instead greedy puppets of corporate masters, willing to dance on their string for the crumbs tossed to them. Disgraceful.”
~addicitinginfo.org

Apache leaders learned of the inclusion of the provision to the NDAA while attending, ironically, the White House Tribal Nations conference. Republican lawmakers have tried for years to secure the transfer of these lands, but have always run into strong opposition from the San Carlos Apache Tribe and Democratic lawmakers.

The NDAA now goes to the Senate for vote.