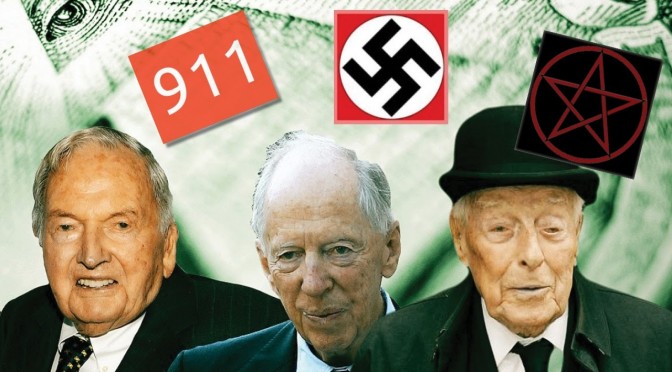 Can it be that only a handful of individuals are running our world?  Are we under the thumb of a secret capitalist network?  Is it true that a global elite rules the world and there is nothing we can do?

The top 50 of the 147 super-connected companies.  You will probably recognize most of these names.  They are the core of the “super-entity”  behind which most of the global elite hide their money and exert their influence.

We particularly appreciate the amount of time and energy that went into compiling this list of the capitalist network that controls the world.

The ultra-wealthy elite often hide behind layers and layers of ownership, but the truth is that thanks to interlocking corporate relationships, the elite basically control almost every Fortune 500 corporation.

The amount of power and control that this gives them is hard to describe.

World Bank whistleblower Karen Hudes says this is not a fight about money, but survival of the planet. “We’re dealing with whether we can continue as humanity and have an earth or whether we blow ourselves up. . . . whether we love each other enough to save the world, or we all go to hell in a hand basket,” says Hudes. Join Greg Hunter as he goes One-on-One with World Bank Whistle Blower Karen Hudes.

Michael Snyder over at theeconomiccollapseblog.com has been writing on the subject for many years.

(Michael Snyder)  Karen Hudes is a graduate of Yale Law School and she worked in the legal department of the World Bank for more than 20 years. In fact, when she was fired for blowing the whistle on corruption inside the World Bank, she held the position of Senior Counsel.

She was in a unique position to see exactly how the global elite rules the world, and the information that she is now revealing to the public is absolutely stunning. According to Hudes, the elite uses a very tight core of financial institutions and mega-corporations to dominate the planet.

Remember, this is not some “conspiracy theorist” that is saying these things. This is a Yale-educated attorney that worked inside the World Bank for more than two decades. The following summary of her credentials comes directly from her website…

Karen Hudes studied law at Yale Law School and economics at the University of Amsterdam. She worked in the US Export Import Bank of the US from 1980-1985 and in the Legal Department of the World Bank from 1986-2007. She established the Non Governmental Organization Committee of the International Law Section of the American Bar Association and the Committee on Multilateralism and the Accountability of International Organizations of the American Branch of the International Law Association.

Today, Hudes is trying very hard to expose the corrupt financial system that the global elite are using to control the wealth of the world. During an interview with the New American, she discussed how we are willingly allowing this group of elitists to totally dominate the resources of the planet…

A former insider at the World Bank, ex-Senior Counsel Karen Hudes, says the global financial system is dominated by a small group of corrupt, power-hungry figures centered around the privately owned U.S. Federal Reserve. The network has seized control of the media to cover up its crimes, too, she explained. In an interview with The New American, Hudes said that when she tried to blow the whistle on multiple problems at the World Bank, she was fired for her efforts. Now, along with a network of fellow whistleblowers, Hudes is determined to expose and end the corruption. And she is confident of success.

Citing an explosive 2011 Swiss study published in the PLOS ONE journal on the “network of global corporate control,” Hudes pointed out that a small group of entities — mostly financial institutions and especially central banks — exert a massive amount of influence over the international economy from behind the scenes. “What is really going on is that the world’s resources are being dominated by this group,” she explained, adding that the “corrupt power grabbers” have managed to dominate the media as well. “They’re being allowed to do it.”

Previously, I have written about the Swiss study that Hudes mentioned. It was conducted by a team of researchers at the Swiss Federal Institute of Technology in Zurich, Switzerland. They studied the relationships between 37 million companies and investors worldwide, and what they discovered is that there is a “super-entity” of just 147 very tightly knit mega-corporations that controls 40 percent of the entire global economy…

When the team further untangled the web of ownership, it found much of it tracked back to a “super-entity” of 147 even more tightly knit companies – all of their ownership was held by other members of the super-entity – that controlled 40 per cent of the total wealth in the network. “In effect, less than 1 per cent of the companies were able to control 40 per cent of the entire network,” says Glattfelder. Most were financial institutions. The top 20 included Barclays Bank, JPMorgan Chase & Co, and The Goldman Sachs Group.

But the global elite don’t just control these mega-corporations. According to Hudes, they also dominate the unelected, unaccountable organizations that control the finances of virtually every nation on the face of the planet. The World Bank, the IMF and central banks such as the Federal Reserve literally control the creation and the flow of money worldwide.

At the apex of this system is the Bank for International Settlements. It is the central bank of central banks, and posted below is a video where you can watch Hudes tell Greg Hunter of USAWatchdog.com the following…

“We don’t have to wait for anybody to fire the Fed or Bank for International Settlements . . . some states have already started to recognize silver and gold, the precious metals, as currency”

Most people have never even heard of the Bank for International Settlements, but it is an extremely important organization. In a previous article, I described how this “central bank of the world” is literally immune to the laws of all national governments…

An immensely powerful international organization that most people have never even heard of secretly controls the money supply of the entire globe. It is called the Bank for International Settlements, and it is the central bank of central banks. It is located in Basel, Switzerland, but it also has branches in Hong Kong and Mexico City. It is essentially an unelected, unaccountable central bank of the world that has complete immunity from taxation and from national laws. Even Wikipedia admits that “it is not accountable to any single national government.“ The Bank for International Settlements was used to launder money for the Nazis during World War II, but these days the main purpose of the BIS is to guide and direct the centrally-planned global financial system. Today, 58 global central banks belong to the BIS, and it has far more power over how the U.S. economy (or any other economy for that matter) will perform over the course of the next year than any politician does. Every two months, the central bankers of the world gather in Basel for another “Global Economy Meeting”. During those meetings, decisions are made which affect every man, woman and child on the planet, and yet none of us have any say in what goes on. The Bank for International Settlements is an organization that was founded by the global elite and it operates for the benefit of the global elite, and it is intended to be one of the key cornerstones of the emerging one world economic system.

This system did not come into being by accident. In fact, the global elite have been developing this system for a very long time. In a previous article entitled “Who Runs The World? Solid Proof That A Core Group Of Wealthy Elitists Is Pulling The Strings“, I included a quote from Georgetown University history professor Carroll Quigley from a book that he authored all the way back in 1966 in which he discussed the big plans that the elite had for the Bank for International Settlements…

[T]he powers of financial capitalism had another far-reaching aim, nothing less than to create a world system of financial control in private hands able to dominate the political system of each country and the economy of the world as a whole. This system was to be controlled in a feudalist fashion by the central banks of the world acting in concert, by secret agreements arrived at in frequent private meetings and conferences. The apex of the system was to be the Bank for International Settlements in Basel, Switzerland, a private bank owned and controlled by the world’s central banks which were themselves private corporations.

And that is exactly what we have today.

We have a system of “neo-feudalism” in which all of us and our national governments are enslaved to debt. This system is governed by the central banks and by the Bank for International Settlements, and it systematically transfers the wealth of the world out of our hands and into the hands of the global elite.

But most people have no idea that any of this is happening because the global elite also control what we see, hear and think about. Today, there are just six giant media corporations that control more than 90 percent of the news and entertainment that you watch on your television in the United States.

This is the insidious system that Karen Hudes is seeking to expose. For much more, you can listen to Joyce Riley of the Power Hour interview her for an entire hour right here.

Karen Hudes exposes The World Bank. It is one of the world’s largest financial institutions said to represent 188 nations from around the world. Its stated purpose focuses on investing in the development of third-world nations and lending interest-free loans to middle- and low-income countries.

According to the World Bank, there are two goals that have been set to be achieved by the year 2030. These include decreasing the amount of people living on less than $1.25 a day to less than 3% and fostering the income growth of the bottom 40% of every country.

Are these goals sensible for the World Bank to accomplish? And, more importantly, can they be successfully achieved in the midst of a significant shift in the global currency market?

To help us break down the global financial giant known as the World Bank and how you can protect your finances during this seemingly unstable global market, we are joined by Karen Hudes, who claims to be a former senior councilwoman at the World Bank.

Next News Network is currently investigating to verify that the allegations and testimonies made by Karen Hudes are accurate.