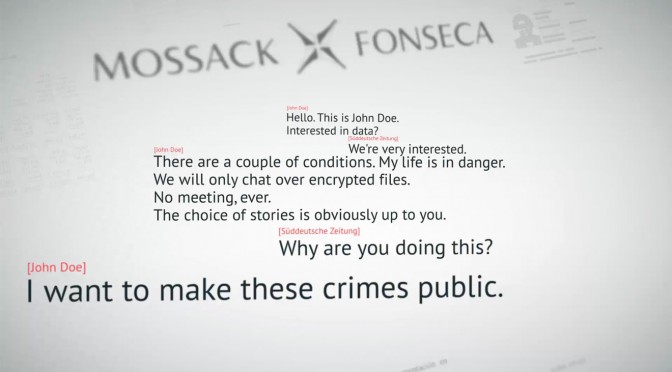 The problem with Corporate Media Gatekeepers – Whoever leaked the Mossack Fonseca papers appears motivated by a genuine desire to expose the system that enables the ultra wealthy to hide their massive stashes, often corruptly obtained and all involved in tax avoidance. These Panamanian lawyers hide the wealth of a significant proportion of the 1%, and the massive leak of their documents ought to be a wonderful thing.

Unfortunately the leaker has made the dreadful mistake of turning to the western corporate media to publicise the results. In consequence the first major story, published today by the Guardian, is all about Vladimir Putin and a cellist on the fiddle. As it happens I believe the story and have no doubt Putin is bent.

But why focus on Russia? Russian wealth is only a tiny minority of the money hidden away with the aid of Mossack Fonseca. In fact, it soon becomes obvious that the selective reporting is going to stink.

The Suddeutsche Zeitung, which received the leak, gives a detailed explanation of the methodology the corporate media used to search the files. The main search they have done is for names associated with breaking UN sanctions regimes.

The Guardian reports this too and helpfully lists those countries as Zimbabwe, North Korea, Russia and Syria. The filtering of this Mossack Fonseca information by the corporate media follows a direct western governmental agenda. There is no mention at all of use of Mossack Fonseca by massive western corporations or western billionaires – the main customers. And the Guardian is quick to reassure that “much of the leaked material will remain private.”

What do you expect? The leak is being managed by the grandly but laughably named “International Consortium of Investigative Journalists”, which is funded and organised entirely by the USA’s Center for Public Integrity. Their funders include

among many others. Do not expect a genuine expose of western capitalism. The dirty secrets of western corporations will remain unpublished.

Expect hits at Russia, Iran and Syria and some tiny “balancing” western country like Iceland. A superannuated UK peer or two will be sacrificed – someone already with dementia.

The corporate media – the Guardian and BBC in the UK – have exclusive access to the database which you and I cannot see. They are protecting themselves from even seeing western corporations’ sensitive information by only looking at those documents which are brought up by specific searches such as UN sanctions busters.

Never forget the Guardian smashed its copies of the Snowden files on the instruction of MI6.

What if they did Mossack Fonseca database searches on the owners of all the corporate media and their companies, and all the editors and senior corporate media journalists?

What if they did Mossack Fonseca searches on every listed company in the western stock exchanges, and on every western millionaire they could trace?

That would be much more interesting. I know Russia and China are corrupt, you don’t have to tell me that. What if you look at things that we might, here in the west, be able to rise up and do something about?

And what if you corporate lapdogs let the people see the actual data?

I would remind you that this blog is produced free for the public good and you are welcome to republish or re-use this article or any other material freely anywhere without requesting further permission.